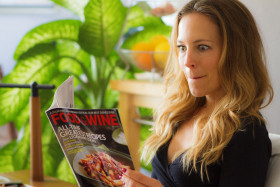 Natalie J. Forté has been a “Food Magician” since she was a young girl growing up in North Carolina & Pennsylvania. ”My love for all things food, actually started when I was about 3,” says Natalie. “My Mom used to mix noodles & ketchup together that I ‘hoovered’ down like a champ. As I got older she made these incredible egg and cheese sandwiches for me every morning before school – yup, definitely where my obsession with eggs and cheese started, love you Mom!” It doesn’t stop there. In Middle School, Natalie was rewarded with an entire Peanut Butter Pie if she brought home a good report card. In her teen years, perogies were the center of Natalie’s world. She also has vivid memories of going around the High School cafeteria, asking people if they were done with their mashed potatoes. If they weren’t going to finish them, she certainly wanted that opportunity. “I know, I’m a weirdo,” she admits with a chuckle.

With a broadcast journalism degree from The University of North Carolina at Chapel Hill, Natalie quickly combined her passion for entertainment and food, as she began traveling the globe to cover some of the world’s most popular and exotic destination spots. Natalie has featured some of the most sought-after vacation getaways like Cannes, France and Cabo San Lucas, Mexico. You’ve also seen Natalie lead local and international press junket interviews to lifestyle programming for NBC, ABC Family, Yahoo!, Reelz Channel and City TV in Santa Monica where she produces and co-hosts an Emmy nominated eco-friendly show called Be Green as well as the popular lifestyle show Get Out!.  She’s interviewed recognizable Hollywood stars including Angelina Jolie, Dustin Hoffman, Natalie Portman and Liam Neeson.

Audiences all over the country can see Natalie as Host of America’s Best Bites on Cooking Channel.  Each week she is on a mission to find must-eat bites from New York to LA, Dallas to Chicago and all points in-between. Viewers can catch a glimpse of Natalie’s ‘real deal’ personality and Southern charm as she dives right into some of America’s most decadent dishes. If you have a favorite ‘bite’ of your own or want to share some of your own personal food magic with Natalie, tweet to her @NatalieJForte. Nothing’s better than making food magic together!

Natalie currently resides in Los Angeles with her husband, Scott and their cat, Riley.